Amid the nationwide lockdown caused by the Corona virus, the money for the Prime Minister's Poor Welfare Package will start flowing into the accounts of women with Jandhan accounts from Friday. The account holder can withdraw rupee at any time as per his wish and requirement. However, the Indian Banks Association (IBA) has appealed for social discrimination to be taken into account. 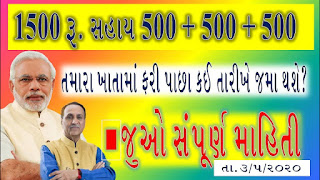 Farmers will also benefit soon
In addition, banks are also looking at the beneficiaries of the PM-Kisan scheme. Under this, Rs 2,000 is being given in the form of first installment. The scheme provides Rs 6,000 in three installments a year. Banks have been asked to provide Rs 1,000 crore to the accounts of 3 crore poor widow pension beneficiaries and poor disabled persons in the next 3 months.
Share Tweet Share Email
Newer Post Older Post