Although the common man has not benefited from the sharp fall in global crude oil prices, the government has. The fall in oil prices has saved the government from subsidizing domestic cooking gas cylinders at the expense of beneficiaries. In May, the government will not pay the subsidy to LPG customers' accounts in all metros under the Direct Transfer Benefit Scheme, while the subsidy will be limited to Rs 2-5 only in other cities with increased transport costs and around Rs 20 per cylinder for 8 crore beneficiaries. 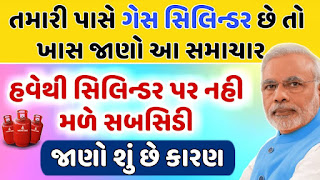 All customers will have to pay 14.2 kg cylinder equal to the market value. Let me tell you, the government transfers directly to the accounts of subsidized customers. The government gives the difference between the market and the subsidized price of LPG as a subsidy. Global crude oil prices have fallen below 35 35 a barrel for some time, even below સાથે 20, with a drop in crude oil prices since mid-March. Along with the decline in crude, there has also been a sharp decline in LPG prices. After this, the prices of unsubsidised LPG cylinders have been reduced to Rs 162.50. From May 1, oil companies have reduced the price of a domestic cylinder by Rs 162.50 in Delhi. Now there is a cylinder at Rs 521.50.

An official of a large public sector oil refiner and retailer said there was no need for the government to provide any subsidy on the current market prices of LPG. Only general subsidies may be required for celebrated customers. In the budget 2020-21, Rs 37,256.21 crore was allocated for LPG subsidy. This is 9 per cent more than the revised estimate of Rs 34,085.86 crore for 2019-20. Apart from LPG, the government may completely end the subsidy on kerosene this year.

According to sources, not only the global oil market has declined but also oil companies have gradually increased the prices of subsidized domestic LPG by Rs 4-5 per cylinder since the end of last year. It has also helped bridge the gap between the market and the discounted price of a product. According to an analyst, between July 2019 and January 2020, OMC has increased the price of subsidized LPG by Rs 63 per cylinder. This is dropping to an average of Rs 10 per cylinder per month. Where the government has reduced its subsidy bill in the current period, petrol-diesel consumers have not received any benefit so far. In fact petrol and diesel prices at the pump have not changed in the last 50 days, while global oil prices have fallen by more than 40 per cent.
Share Tweet Share Email
Newer Post Older Post